The Elder Statesman of Nyonya Cuisine How Baba Jolly, Singapore’s homemade chef, spiced up the kitchen and brought customers flocking back to Concorde Hotel. 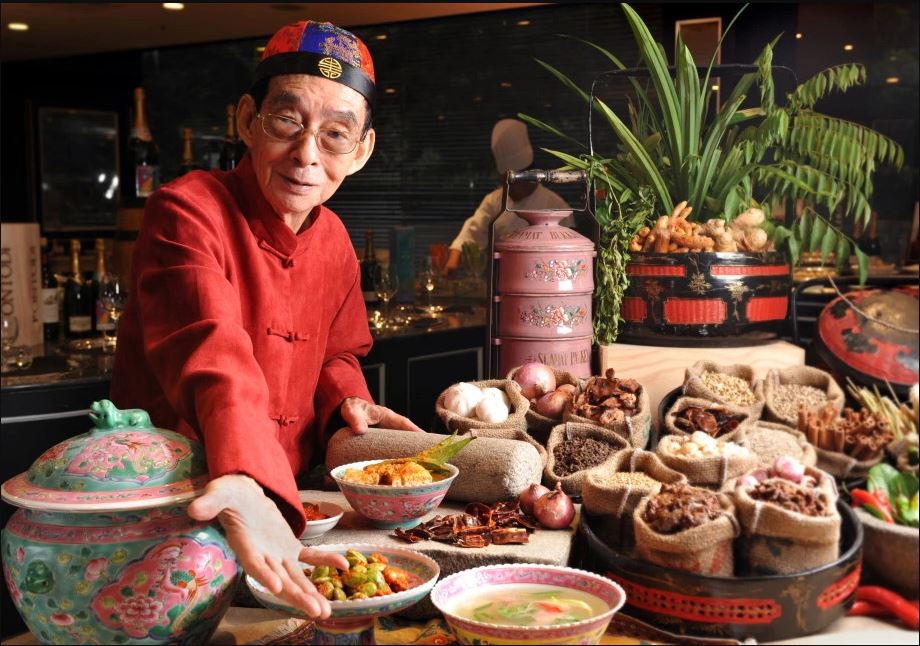 In this Wee family circle, the celebratory refrain at gatherings is instead sung, “For Jolly’s a good fellow.” For patriarch Mr Jolly Wee, better known far and wide as Baba Jolly, is indeed a jolly good fellow. Despite a strict upbringing by his elders, several generations of Peranakan (Straits Chinese) from the  Riau islands.

The Peranakan (“locally born” in Malay) Chinese date from 14th to 19th Century, and are descendents of Chinese traders who settled in Melaka, and lured by commerce, ventured to Penang and Singapore, where they developed their communities, also known as “Straits born”. Members of this community are addressed as Baba (men) and Nyonya (women).

Many were English-educated and considered “elites”, with an affinity for the British (than China). Through intermarriage (with Indonesian and Malay) and trading, the Baba and the Nyonya were fluent in English and Malay, hardly speaking any Chinese. And you were of course expected to make liaisons with your own kind. So Babas married Nyonyas (or incur the wrath of the clan).

Baba Jolly, 88, had his head turned by a girl on a bicycle along Joo Chiat Road some 70 years ago. “My friends were in this toddy shop in Joo Chiat Road. Violet (the girl on bicycle) worked in the office where you went to collect your ration of of rice. One day she asked to borrow my camera. From there, we started cycling in the kampung (village), buy koay teow (flat rice noodle), got to know each other better.”

To hear Baba Jolly recount his early years, is to take a stroll through a Singapore redolent of village life where everybody knows your name (and your father’s business). But it was not all manis (sweet). “Her father hated me, and my father didn’t like her.” Violet was a Hakka Chinese. “But we were both strong in our love. In fact I saw her father beat her. So I planned a way out. I was very daring. Secretly we packed our things, and helped by a Malay family, we lived in a room in Dickson Road. Half the size of a room in today’s HDB flat.”

When Baba Jolly and Violet brought their first-born Sylvia to show to the Wee grandparents, tears were shed, forgiveness was begged, a party was thrown. Naturally, a tok panjang (long table, laden with food) ensued. Five sons followed big sister Sylvia. Baba Jolly’s long association with good food stems from his primary school days. “After school I would sell kueh (variety of local pastries) for my mother which she made from leftovers, kueh chara, popiah goreng. She would give me two cents as reward. I enjoyed following my mother to the market, in char kiaks (clogs) and bakul (basket), helping her in the kitchen.

For Chinese New Year she would make blandah and bangkit (biscuits) and we would have a big feast, a chicken. My mother could not bear to slaughter the live chicken, so  I learned to do it, from watching the seller in the market. From here on I learned to do things correctly. So I am very strict about doing things the right way.” Two of his children, Sylvia and youngest son Mervin, confirmed that their parents raised them right from being strict and to a rigid code of conduct. “Not like today’s children,” said Sylvia, who is rather relaxed with her children and grandchildren. “We didn’t say much in those days. Parents did all the talking. And deciding.” Even friends are not spared this “correctness”.

When a friend mused about her fancy for running a nonya food outlet, Baba Jolly sat her down and took her through the paces of getting it all right. From helping her scout a location, interior decor, to offering free morsels, to setting up a corner selling Peranakan arts and crafts. It was tough going, or, as Baba Jolly put it, when he found her crying, “If uncle don’t teach you properly now, next time you suffer.”

Today of course the said lady operates her cafe and catering business, to great success. His own great success has seen Baba Jolly notch some 20 cafeterias under his sarong belt. Said Mervin, “Oh my father ran cafeterias for companies, like Caltex, Esso, Fairchild, Mobil, Texas Instruments, all.” The jewel in the crown for Baba Jolly was breathing new life into Spices Cafe at Concorde Hotel Singapore. “The restaurant was rather quiet,” Baba Jolly described his first visit. He’d been tasked to reposition the restaurant with a nonya menu. Singapore’s elder statesman of Peranakan cuisine had already been invited abroad, a few times over, to “ambassador” the culture and food of this colourful community. It was a task he loved  and relished.

To hear Baba Jolly tell it, there is no mystery surrounding Peranakan dishes. “You have to know your spices, how to cook it, and there you have it, no magic.” He is modest, about his sleight of hand, in the kitchen. “From my mother’s time, we had no measure, we simply used our hand. If you pick up some onions in the palm of your hand you will find it is about 120 grams.” A cubit (pinch) of this, an agak-agak (approximation) of that, a nose for when the tumis (stirfry) is done, an eye for presentation, and the final taste test, is Baba Jolly’s nonya cooking creed.

A stickler for getting it perfect, he toiled in Concorde’s kitchen till the cooks got it right. No rempah (spices paste) escaped his steely-eyed supervision. “I’m strict. You don’t follow me, don’t waste my time. You get it wrong, I show you how to rectify.” And the crowds came, especially Bibiks (aunties) and Babas, arguably the toughest palates to please. They left grinning. The dishes were spot-on, having passed the taste-test of the Peranakan community at large.

Baba Jolly’s wife Violet passed away two years ago, after 65 years of marriage. He has 11 grandchildren and two greatgrandchildren. His parents’ family grew up in East Coast Singapore, where his father worked in the post office, his mother brought up six children.

“When she was free, she would play cherki (card game). I too followed in her footsteps, when I had my own family, I sell food I made, mee siam (fried vermicelli) from a pushcart in St Michael’s estate, before running canteens. But I always cook the family meal.” Sylvia recalled, “My mother would be playing mahjong, and my father would call her to come home and eat.”

The senior Mrs Wee was a mean cook herself, but deferred to her hubby in the kitchen. All their children and in-laws have learned to cook. Well, there’s always Baba Jolly’s cookbook and family recipes (Sylvia is the guardian) but these years, like most families, they eat out over Chinese New Year. “So many tables lah, you know, our families. The Peranakan baju (clothing) of sarong kebaya, baju lok chuan (long shirt) is not so much sported except for occasions calling for the traditional dress code. Many have married ‘out’ to non-Peranakan as the culture has shifted. Some superstitions persist. You swallow your noodles, not bite them because that would be to ‘cut short your life’. And when you accidentally choke on a bone, swallow a ball of rice, spin your plate round three times, chanting ‘kucing, kucing, kucing’  (cat, cat, cat).”

However, the community’s fame for its “lau juak” (knowing how to enjoy life) thrives. Its love of song and dance and drama, and even a good old gossip. And ultimately food. Nonya cuisine, Peranakan dishes. Baba Jolly continues to give cooking lessons. (As far flung as Abu Dhabi, Bali, Hannover.) He even taught a boy who had decided on a hair-stylist career to open a Straits Chinese cafe in San Francisco! A word to the wise, before embarking on an food and beverage career, “Study the environment. Take risks. Dare to change.